AUDITION RECORDS "the monthly e-magazine of Experimental Music", is curated by Julian Bonequi, mexican musician and activist currently living in Barcelona. The philosophy of this new proposal aims to open a new space on the netaudio community focused on improvised music and live performances around the world. 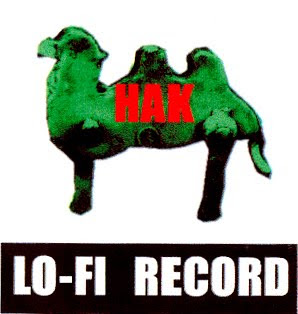 A few months ago, Julian Bonequi asks to Anton Mobin to create a retrospective document about H.A.K. LO-FI RECORD, and more precisely about the activities of the collective around "Improvisation". 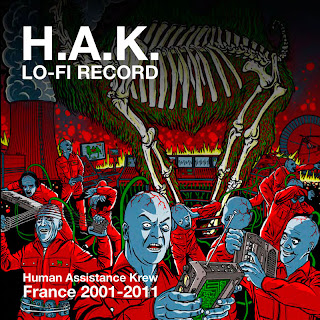 This is a promotional compilation of the catalogue of H.A.K.
Curated by Anton Mobin and Julian Bonequi.

Each track in this document has the credit of the artists
We want to give special thanks to Anton Mobin for his support, H.A.K. and all the artists involved.

Picture by Der Kommissar for the birthday of the collective in 2011.
Cover design by Aniana Heras.

This Work is under a Creative Commons License 3.0 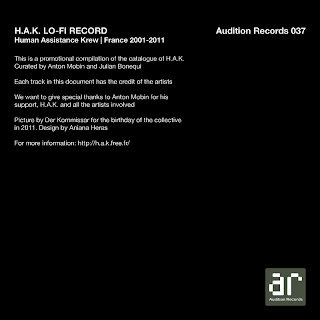 Created in 2001, H.A.K. is a variable-geometry collective which combines more than 80 artists around the world. H.A.K. LO-FI RECORD is a label of independent music, as well as a group of sound researches wondering about the sound spaces, in term of urbanity or plastic installations, and on various ways to practice Sound nowadays.
In 2011, for our 10 years of activity, 220 productions mark out the route of H.A.K. LO-FI RECORD : CD-r, CD, vinyl, book, DVD

Unofficially the cover of one of our first project (which is not included in the regular H.A.K. collection) showed the following title: "Human Assistance Krew".
Officially these three letters doesn't mean anything at all! Nothing serious nevertheless! For H.A.K. many things - as records titles, compilations projects or events names - come from a good joke. Nothing is serious but we do it seriously!
But the truth is that this question is a steady one. These three letters does intrigue and everybody would like to know their signification, their symbolism. To this question we collectively decide once and for all to answer NOTHING.

These three letters sound pretty good together, in the end! Nevertheless the most important term in our name appears to be “Lo-Fi”. Today everybody knows that word, everybody wants to be “Lo-Fi”, it's a hype!
But 10 years ago, our will was to associate the word with a practice - at the same time amateur, self-confident, bringing together what is at hand and D.I.Y. - as much as for the production than for the hand-made realization of our records.

We are in Le Havre at the beginning of the 00's. Benoît Hixe create X-Prod which publishes, at a hand-made micro-edition format, the sound productions he realizes while at the Beaux-Arts (a French institutional Art school) in Le Havre.
In October 2001, AxDelbor and Benoît Hixe leave the Beaux-Arts. AxDelbor stays in Le Havre, while Benoît Hixe goes to Lyon. Yet they decide to unite their forces and ideas to create a collective project, which becomes the H.A.K. Lo-Fi Record entity. A label and an alternative movement are born.

H.A.K.'s first projects are shaped as open to everyone audio compilations and sound installations. Ten years later, H.A.K. is now a company of artists, whose active members live in miscellaneous cities in France (Paris, Orleans, Lyon, Dunkirk, Bourges, Tours, Saint-Etienne) and abroad (Brussels, Berlin, Netherlands, Spain, USA, Canada…). Furthermore, H.A.K. set up two associations in France to manage its activities. One is in Lyon, kept by Ax Delbor and Dead Beat, the other is in Orleans managed by Ayato, Anton Mobin and Extrasystole.

Since the very beginning, H.A.K. got itself organized as a secret organization, a shadow company, a group which move around as a submarine under the known surface of the underground. In other words, H.A.K. develops by itself and for itself in a complete self-sufficient system. Shadow company, web collective: a first version of a web site had been made thanks to AxDelbor, which includes all the activities of H.A.K. Lo-Fi Record - audio projects, compilations, call for projects, sound installations, videos, instruments making… Now, our official web site is two blogs and an on-line collection at Archive.org.

H.A.K. first values are exchange and meeting. Improvisation becomes a way of thinking on the verge of a way of life. Where every meeting is a pretext to play, record and produce a record in quite a short time.
The improv series “Documents”, “Skull”, “Crash” and “Instantané” are nothing but expressions of this way of thinking.
Each series engages the artist into strict constraints of production: “Documents” are “lounge” improvisations - no editing nor treatment are allowed. “Skull” are live recorded studio improvisations, for which editing is allowed.
After ten volumes in this series, we went to the “Crash” one, which goes with the same constraints than “Skull”. Ten “Crash” volumes later H.A.K. opens the “Instantané” series, still a topical one, which offers new encounters and the arrival of new artists. Besides, it is important to state that coming from the graphic arts, visual identity is a significant characteristic of H.A.K. Each of these improv series have its appointed artwork artist, which creates a graphic unit: “Documents” are by Benoît Hixe, “Skull” by Darby Mullins, “Crash” by Carlos Groënland and “Instantané” by AxDelbor.

Self-sufficiency is therefore the best way to define the company's first years, which in no way detracts from the will to do, produce and always going ahead with more and more ambitious projects. In this way, a commitment highlight the H.A.K.'s approach: if you want to do something do it, don't ask for nothing and don't expect anything in return. So that in ten years of activity and after the production of 220 records, DVD and books, H.A.K. didn't perceived any subvention from any cultural institution. The engaged expenses come from after-shows records sales and the money often comes from our very pockets. Here again we talk about meeting and not affiliation. That's the way things are, but they could as well be different…

The collective grew fast, and around its 5th anniversary it gathered more than 80 international artists, who had joined at least one project from the company. Encounter follows encounter and each is a new one.
There's a wide range of affiliations and aesthetics, and the scope of possible seems to be infinite: H.A.K. gather together sound artists as well as musicians, visual artists, video-makers, illustrators, cartoonists, dancers, journalists, poets…

A meeting inspires the other, so that an organization chart in a rogues' gallery style would be a kind of manifest able to depict these gears of connections. The Map designed by Isabelle Pichat is a contribution to this end. 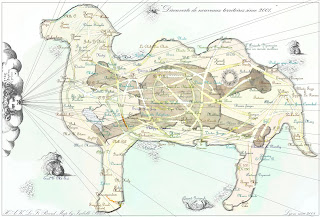 Realized in 2008 by Isabelle Pichat to reprensent all the extensions and the ways taken by the collective.
All the names of the collective H.A.K are mentioned.


In order to swell its ranks and to gain some notoriety, H.A.K. got involved into the organization of sound events. The first evenings took place in Orleans with a variable-geometry game called “Grand foutoir” ("Big mess"). During these evenings managed by a referee, meeting and sharing were the rule. Up to 20 artists could be on stage, ready to act. The referee threw two dices: the first to set the number of musicians involved in the improvisation (from 1 to 6 artists), the second to set the duration of the improvisation (from 1 to 6 minutes), and so on… “Easy Band” is a more elaborate form of this project, which had been developed in residence then on stage on 4 occasions in Lyon and Chartres in France.

It is to be noted that to become a member of H.A.K. Lo-Fi Record there is no more membership nor membership card, than financial relation or interest between the artist and the company. Following this idea of exchange and mutual trust, every artist who produced a record on H.A.K. and all those who wish to make it in the future, act in accordance with the principle of donation. No contract managed the production, although there have been several attempts but in vain.

Shadow company, web collective, H.A.K. contributes to the Copyleft movement since the beginning, offering on its first site's version numerous free downloadable sound excerpts, without knowing that the free music movement was rising at the same period under the aegis of the Creative Commons and other Art Libre free licences. It's quite funny to notice that after ten years of activities. Late indeed, but in line with its ethics, H.A.K. offered around 2007 to all artists having a record in the collection the opportunity to register their work under Creative Commons on the online library Archive.org.

For 5 years H.A.K. tries to open up and to develop links with other structures involved with similar interests, with the will of getting out of autarky. Sharing more, thinking bigger, looking farther, meeting international artists, connecting labels, as much as participate to projects proceeding from others, as call to projects from other labels or companies and participation to events organized by external structures.


Can you mention another propositive projects (labels, organizers, collectives) in the venue of experimental, noise and improvised music working in your country? ( it doesn´t matter if they don´t exist anymore )

This is a tricky question to which we decide not to answer explicitly in full. We don't have any commercial approach for sale, search or contract. Though, on our pathway the places, artists and labels below allow us to obtain a support, an assistance, a backup, or offered us a motivation or a solution for the organization of one or several projects, and we give them our faithful consideration.

And now, the last question. Who is Anton Mobin?

Anton Mobin is Anthony Baron. He was introduced in H.A.K. Lo-Fi Record with Ayato in 2003, with a featuring as bassist on the album “Legal vs illegal” (hak20).
Early, Anton Mobin releases all his productions on the label H.A.K. and gets involved into the organization of the evenings " Grand Foutoir " at Orléans with Ayato and more recently at NK (Berlin) with Denis Mac Carty. At present, his ambition with H.A.K. is to open the label to more international artists and to amplify the connections.

His musical interests are the improvisation and the intuitive music through objects manipulation and home made instruments. Also, he gets involved in radiophonic creation and sound art as an independant radio producer for the ARTE Radio.com and produces his own broadcast “A Maïzing session with...” on the webradio KKWNE. He organises in Paris a serie of events called “Trapped Noise” dedicated to improvised and noise music. Also “Tales For Tapes” a serie of live events dedicated to tape manipulation, co-curated with Rinus van Alebeek in Paris, Berlin and Brussels.

Born in 1979, Anthony Baron lives in Paris and works where the improvisation and the sound creation is going full swing in the world. It is under the name of Anton Mobin that he produces his radio creations and that he occurs on stage. Anton Mobin's sound activities evolve in two universes: the improvised music and the radio art. Sound artist and radio producer, the sound recording and the sound effects are the essential elements of his work of composition. He defines himself his initiative in the continuity of the concrete music: his approach is directed on the listening of the sounds of the everyday life and their use in the radio composition, to develop an "extensive" concrete music.

Diversion and manipulation of sound objects, trivial fragments and reorganization of the reality are so many ways investigated in his creations. Anton Mobin develops his own methods of composition in which he experiments different constraints of place, time and also technical to produce a unique and personal radio art. The work of sound creation and Anton Mobin's improvisation have been physically edited or on-line published by 36 labels in 14 countries worldwide. His work has been played on different radio shows and sound festivals in France, Norway, Portugal, Germany, Belgium and the United States. 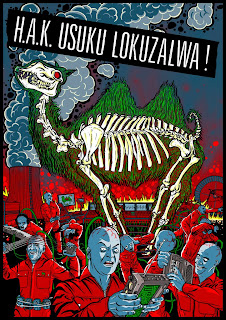 Original design created by Der Kommissar
for the 10 years of the collective H.A.K.